A two-year investigation conducted by a multijurisdictional drug task force that included Agawam, Westfield, West Springfield and Southwick police, as well as the Hampden County Narcotics Task Force and U.S. Drug Enforcement Administration Springfield agents, ended when Jax followed a suspect's scent to a storage unit at Uncle Bob's Self Storage located at 511 Springfield St. in Agawam and discovered nearly 200 pounds of high-quality marijuana with a street value of nearly $400,000 and $1.2 million cash, , Krutka said.

“That’s what a K-9 does. It’s nothing personal. It’s just a game to him." Officer Thomas L. Krutka

Police, he said, were in the process of serving a search warrant on the storage facility rented by one subject when a car driven by a second suspect pulled into the driveway. Upon seeing authorities, the second suspect fled and led police on a small car chase through Agawam, Southwick and Suffield, Conn. where he abandoned the vehicle and continued on foot through a wooded area.

"We were in the middle of a search warrant when another subject not known to us appeared in a vehicle," Krutka said. "He bolted when we attempted to stop him. Jax tracked him for 45 minutes until the subject came out of the woods and got into a waiting pick-up truck."

Jax was then brought back to the storage facility where he searched the outside of 50 to 75 units "until he hit on the narcotics," he added. "Based on that hit, police had enough probable cause to apply for and obtain a search warrant for that particular unit. We opened it and found the narcotics and cash."

The $1.2 million, Krutka noted, "is the largest cash seizure in Massachusetts, and because of the amount of money agents from the federal Alcohol, Tobacco and Firearms (ATF) division were called and joined the investigation." 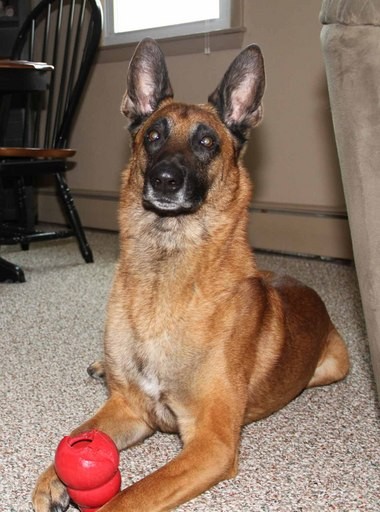 WESTFIELD. Photo by Manon L. Mirabelli. Southwick K9 officer Jax at play in his Westfield home where he lives with his handler, Officer Tom Krutka