NAGE at a Glance

The National Association of Government Employees (NAGE) is an organization of members united by the belief in the dignity and worth of workers and the services they provide. We are dedicated to improving the lives of workers and their families and creating a more just and humane society.

We are public and private  workers—federal, state, county, and municipal employees—police 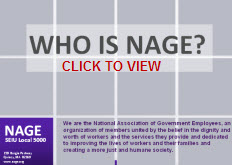 officers, firefighters, correctional officers, health care workers—nurses, paramedics, and emergency medical technicians—office workers, and professional workers. We seek a stronger union to build power for ourselves and to protect the people we serve.

Women and men of every race, ethnicity, national origin, religion, age, physical ability and sexual orientation, we are the standard-bearers in the struggle for social and economic justice begun nearly half a century ago by shipyard workers who dared to dream beyond their daily hardships and to organize for economic security, dignity and respect.

You will sometimes hear NAGE referred to as SEIU Local 5000. NAGE affiliated with SEIU in 1982 to become part of the largest and fastest-growing union in North America, with more than 2 million members.